THE INTERPRETATION OF AN ORIGIN

Mas del Serral is a pathway with a single destination: the origin. When we distance ourselves from our roots, we are able to reflect about the place we come from, there where our identity was shaped, where we learnt to dream as children and where fears were nothing more than horizons to cross. Perhaps this is what happened to Joan Miró when, in 1922, he was staying in Paris and painted La Masía, The Farm, the painting where he paid homage to the country house in Mont-Roig del Camp where he learnt to draw when he was three years old. Similarly, observing the painting by Miró in the National Gallery during a key time when he was far from home, Pepe Raventós realised that his dream was to restore Mas del Serral to its origins: traditional agriculture based on the harmony between nature, animals and mankind and the evidence that, as the painter said,

"to be universal you have to be radically local"

4 years after the first vintage

"The longer I have lived in Mas del Serral, the more I realize the uncertainties of making wine. That there are no predetermined rules and that there are no sciences to follow."

"Wine is experiencing a good moment. A moment of going back to its origins. Back to simplicity, to transparency. The recovery of natural prominence and liberation from snobbish or pretentious positions."

"The magic of wine lies in the power of taking you to the place where it was made; it takes you on a journey to its origins"

"Our aim is to express the maximum potential of the plot: austerity, Xarel·lo, salinity and minerality. It is only when we fully discover this potential that we can interpret Mas del Serral"

"Mas del Serral is where the past and future meet; offering something lasting in the future but also working on it with the ways of yesteryear"
Harvest 2007 / Harvest 2009 / Harvest 2010 / Harvest 2011

This vintage comes from a relatively warm winter, rain during the spring and a gentle summer; the stock grew with force. The lack of water in the summer caused hydric stress that advanced the cycle by one week compared to other years. Finally, the rain in early August helped the plant continue to ripen calmly until the harvest. With an average temperature of 14.5° C, and a very low rainfall of 365 mm, we had performances of 15% less than the average of Clos del Serral. An extremely dry and temperate vintage, perfect for a long ageing. 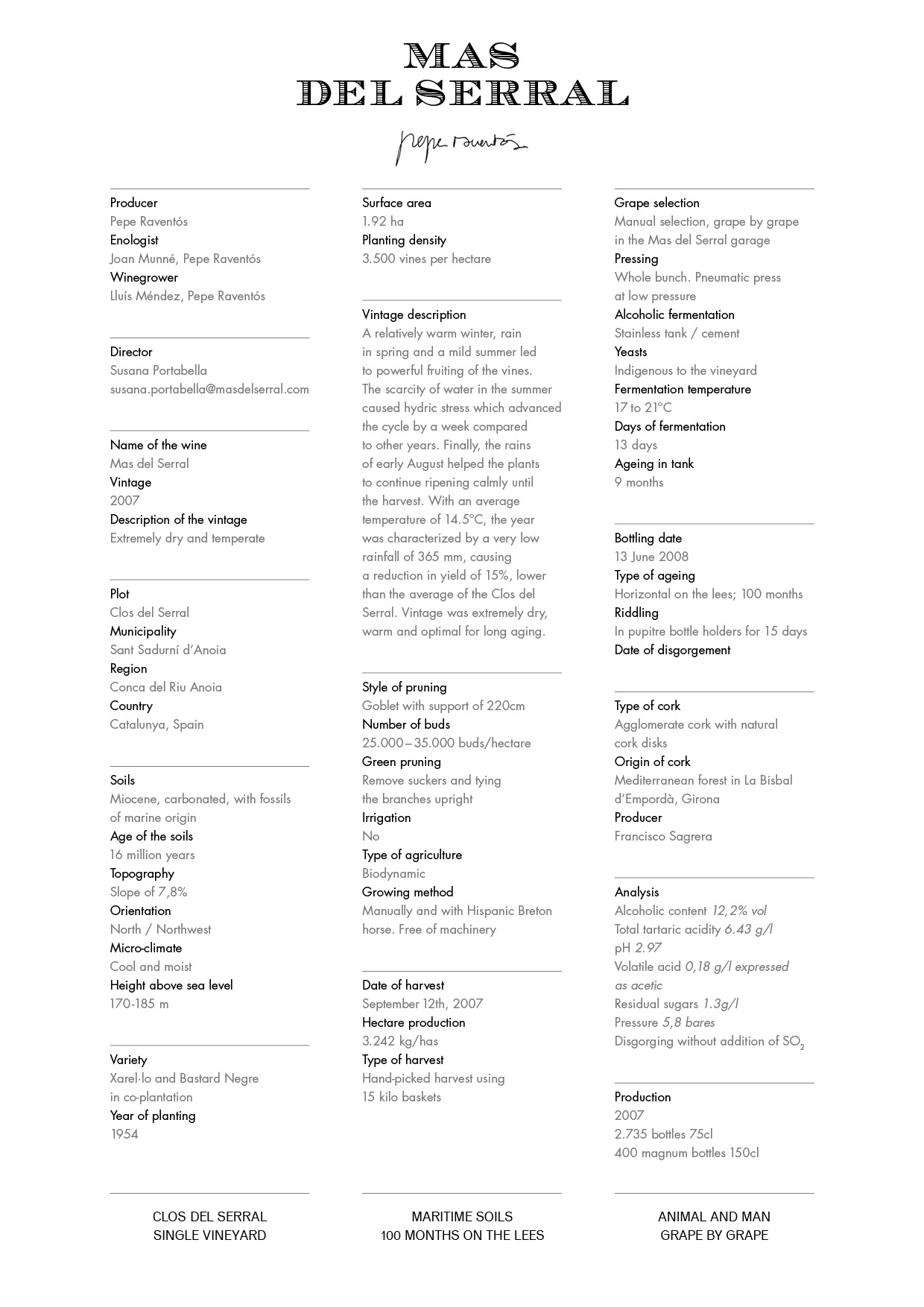 The 2009 cycle began with a rainy autumn and winter.
Lots of rain during the months of March and April. The dry spring favored a slow and healthy vegetative growth. In the month of July, 41 liters rained down, helping the plant at this critical moment and slowing maturation. A dry and hot August provoked a fast, healthy and quality harvest.
The cycle 10 days longer than usual was ideal to promote optimal maturation with great natural acidity. Add with an average temperature of 14.4º C (average annual of 15.3º C) and pluviometry of 526 mm (annual average of 520 mm). 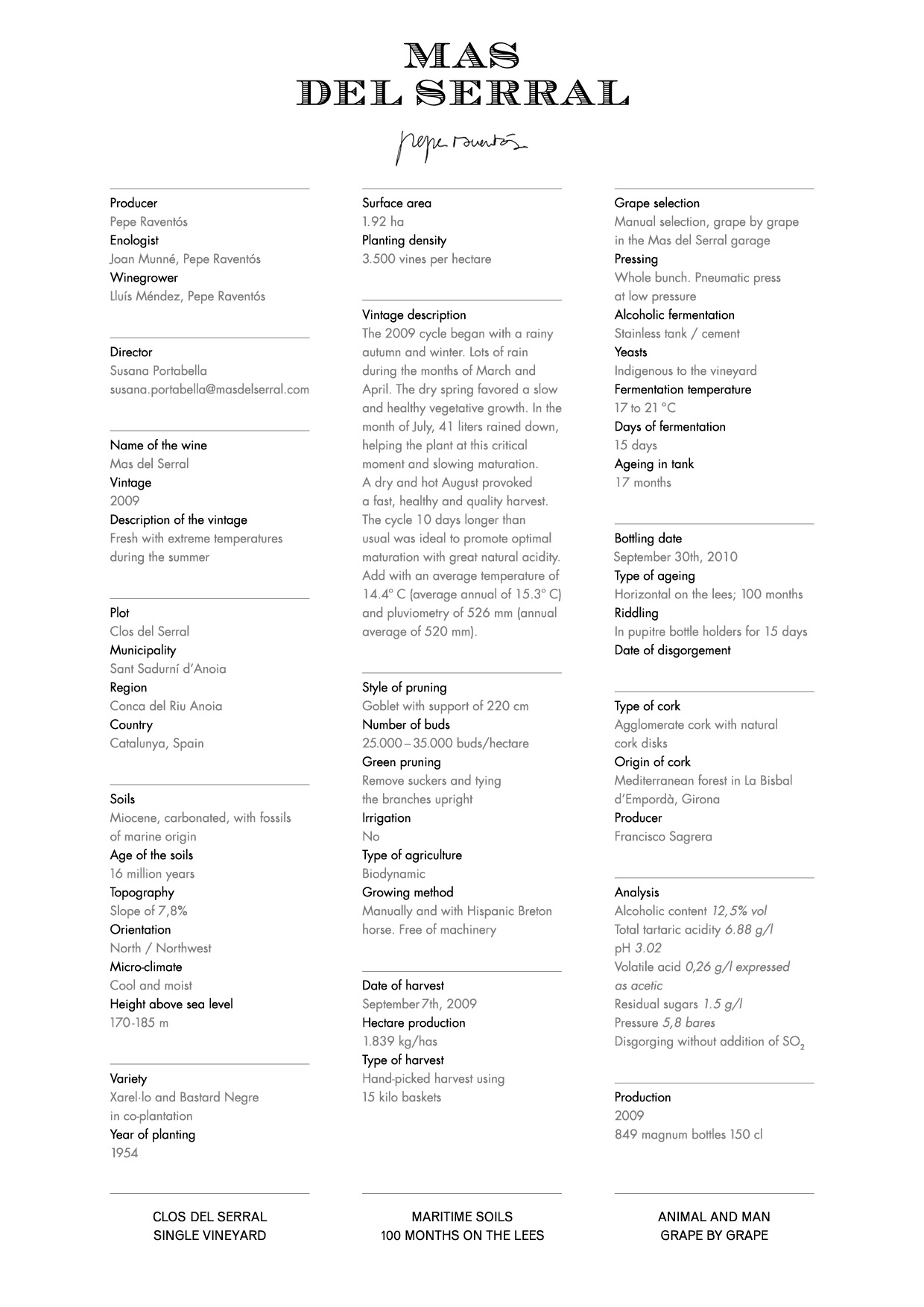 High rainfall and a cool vintage.
Very good vintage structured and acid wines. A cool and extreme year, with a snowfall on March 9 that we will not forget.
The season began with a very rainy October and a cool autumn that allowed us to keep the leaves for a long time. The winter was long and cold. The spring was cool and rainy, and it was not until August that the heat arrived. During the crop year (October 2009 to October 2010) we had 700 L of water and the average temperature was 14.4 °C (57 °F). 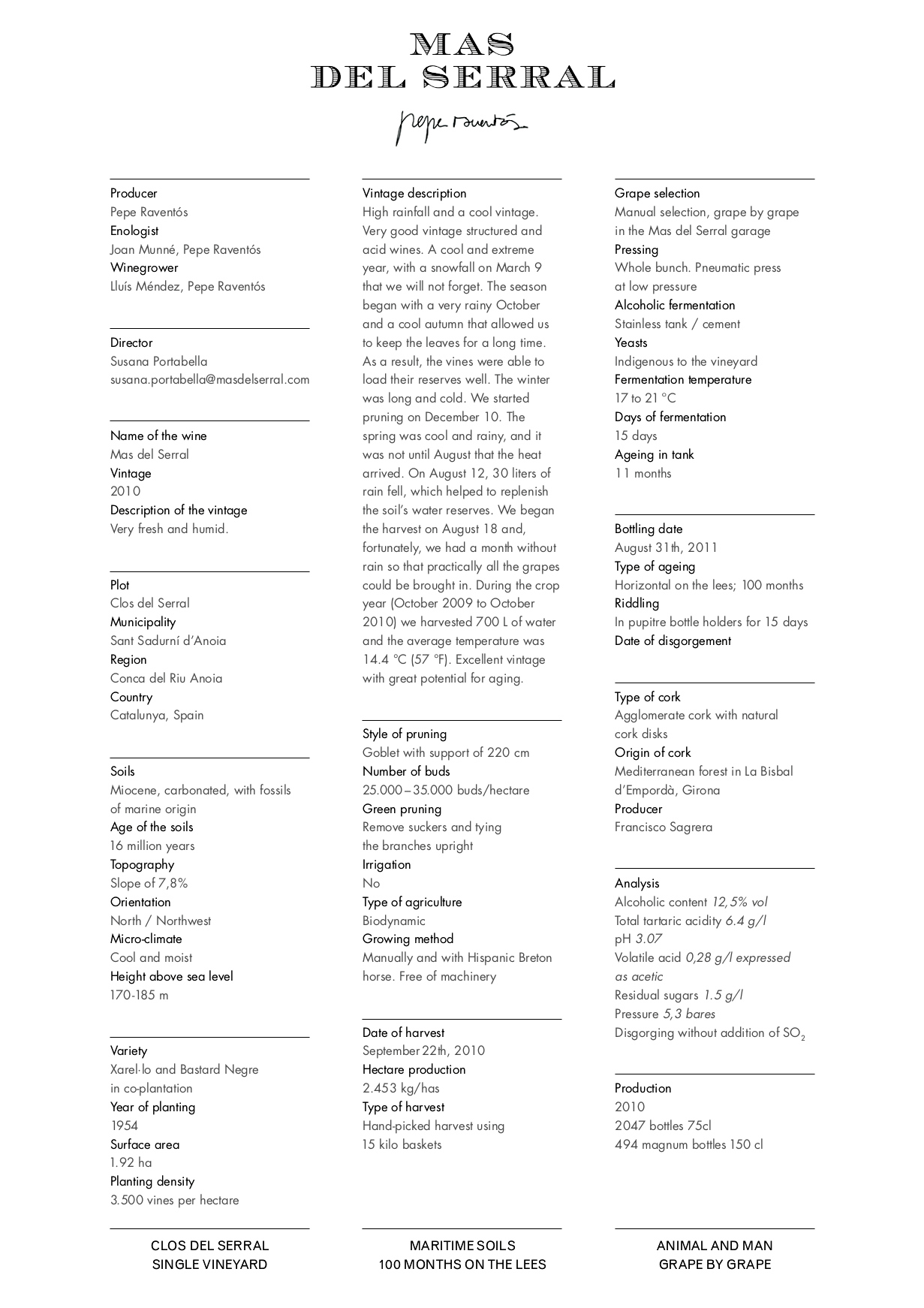 The vintage rainfall of 491 L/m2 was well distributed during the growing season and the average temperature was 15 ºC, the same as the average of the last ten years. The harvest was of high quality and healthy, and the choice of the ripening date was very important in order to achieve a good balance and avoid heat stress. The mild winter advanced the cycle. The spring was rainy and gave us a good water reserve for good plant development. The dry summer with some occasional rain and extremely warm temperatures for our area led to quick ripening and a healthy harvest. 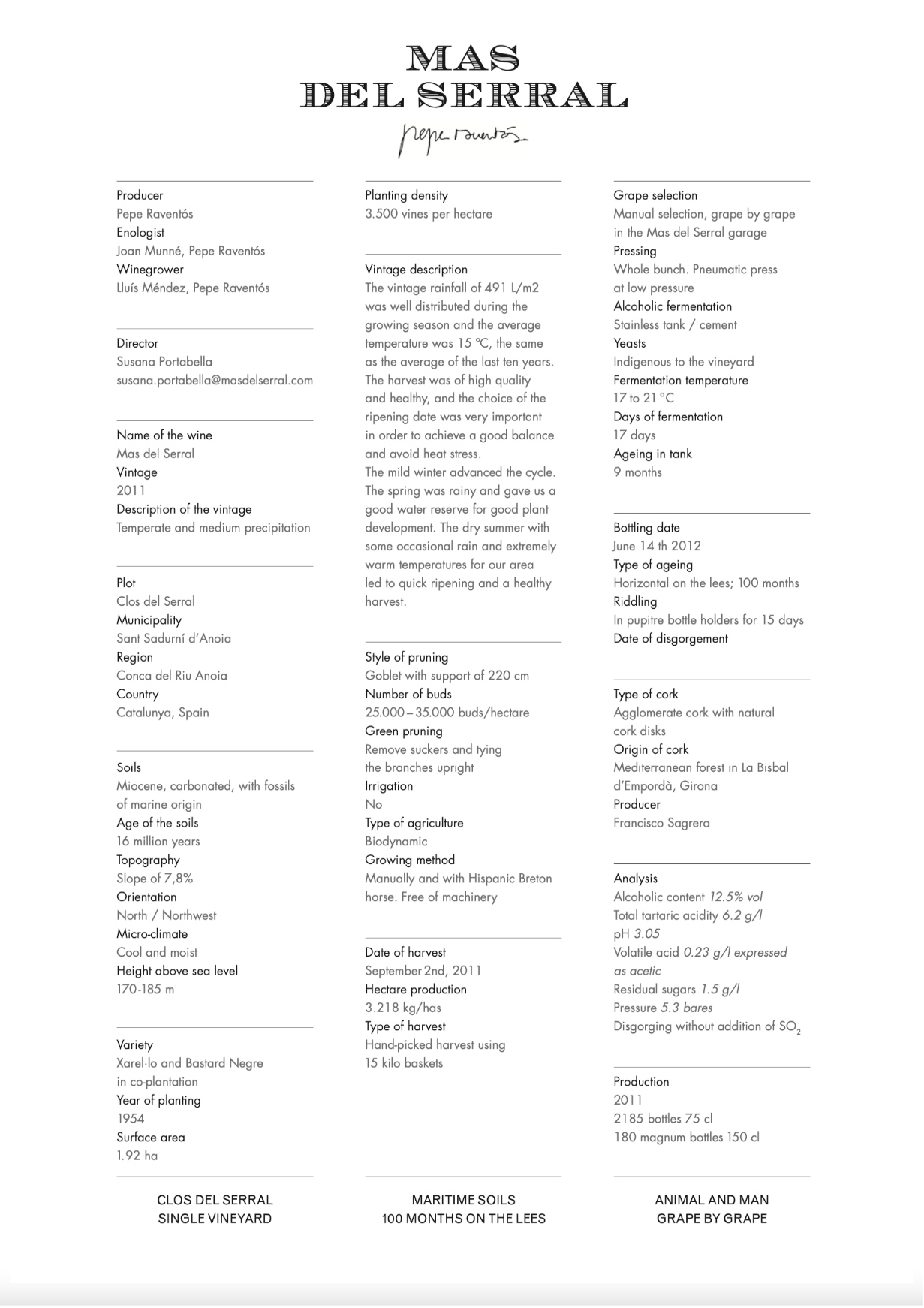 "Every aspect of this wine is hand-produced craftsmanship, carefully made with excellence and perfection"

"Somehow he's telling us, little by little, don't get caught, are you ready?
That would be a bit of a dialogue with these wines."

"The more time I spend living at Mas del Serral, the more I realize that when making wine there are numerous uncertainties, no set rules and that there is no science to follow."
Mas del Serral 2009 among the Best of the Best of 2021!

126 wines were blindly judged and tasted over two days, with three judges selecting "the best of the best". Only 51 wines among the best in the world, Mas del Serral among them.

Wines of the Year - Decanter Magazine, February 2022.
"A wine defined by our soils, where you can experience the land, the air and even the mountains"
"Pepe Raventós has tried to lend the act of winemaking creation the sincerity of artistic endeavour. […]
It’s the wine of a farm, and you need to meet the farm first […] The wine is busy with scent, as the farm is with life."
- Andrew Jefford -
The World of Fine Wine
April 2021
"11 years later the wine expresses this delicacy, this tension despite coming from a generous year, a temperate year, a Mediterranean year."